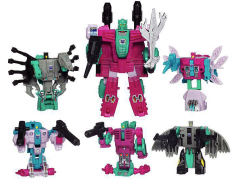 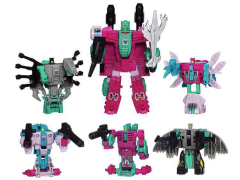 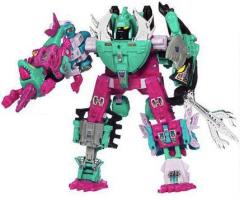 The Seacons are available in their traditional G1 colors for the first time in over 20 years since their initial release in 1988!

This amazing exclusive comes packaged in an awesome collector gift box, includes collector cards, includes all 6 figures needed to form Piranacon, 5 black display stands for the 5 smaller figures, and individual weapons for each figure. This is the first time Piranacon has ever been reissued with the G1 color scheme.

The Seacons are a team of Decepticons named for their sea-animal alternate modes. The team is able to merge their bodies and minds to form the gigantic Piranacon. The team members are:

Snaptrap is the team leader. He rules the other Seacons through fear of force rather than any sort of inspirational leadership qualities. He is, however, very good at what he does: brutally and efficiently taking apart Autobots.

Overbite is interested in only one thing: hunting prey, be it Autobot or luckless human ships that happen to get in his way. He possesses extra limbs to help function on land.

Seawing is the team's stealth specialist, gliding silently through the water and attacking without warning. He also has designs on being the leader of the group.

Skalor is disgusting even by Seacon standards, always leaking oil, lubricants and various other fluids so that even the other Seacons try to avoid him.

Tentakil is the cruelest of all the Seacons, which is saying something. He'll lure opponents to their doom by complimenting them on their battle prowess, letting them think he is an honorable foe; then he'll strike and take them apart. He enjoys tricking them more than actually destroying them.

Although the Seacons' are wildly disparate, their combined mode of Piranacon is a successful combination of their minds. But as all the Seacons love hunting their prey, Piranacon (known in Japan as King Poseidon) is likewise solely dedicated to it without the personality conflicts that paralyse other combiners, and will hunt his prey unceasingly if need be.

Another note: in the Japanese Masterforce cartoon, all of the limb figures are clones, making them perfect for army-building.