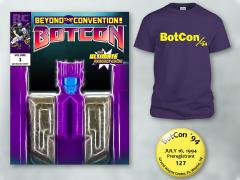 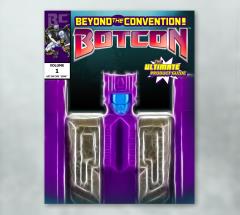 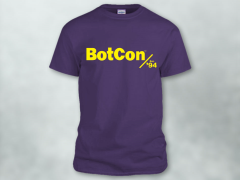 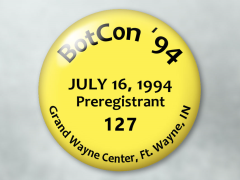 This special "1994" edition of BotCon Beyond The Convention: The Ultimate Product Guide, is only available at BigBadToyStore! The 144-page, softcover book has an exclusive cover featuring Generation 2 Breakdown and is limited to only 300 copies.

Each book will be bundled with a limited edition BotCon 1994 throwback T-shirt, and a limited edition BotCon 1994 inspired attendee pin. The t-shirt is based on the original purple t-shirt design. The attendee pin is like the original design and will feature the number 127 because the very first BotCon had 126 total attendees. The t-shirt and pin will only be available in this BBTS Exclusive bundle.

Every year during its tenure from 1994 to 2016, the BotCon conventions offered fans the chance to purchase new and exciting exclusive action figures to add to their collections or take home as extra special souvenirs. Over 180 of these exclusives were produced during those 22 years, ranging from repainted figures to full redecos to re-sculpted parts to fully new accessories and action figures only available at the events!

BotCon Beyond The Convention: The Ultimate Product Guide Volume 1 is set to be the first publication to collect and catalog every single exclusive and provide a comprehensive guide to every figure sold by 3H, Men In Black, OTFCC, and Fun Publications. Volume 1 showcases the figures, accessories, and convention memorabilia with clear and clean photography letting these amazing collectors’ pieces have the perfect display to dazzle. In addition to that, there will be over 16 pages of behind the scenes and in progress images of the various levels of production of a BotCon exclusive.

Whether reliving nostalgia or fawning over what collectors may deem as “a grail”, BotCon Beyond The Convention Volume 1 will be a remarkable reference for toy fanatics everywhere!

This item is limited to a specific quantity per household. This limit will be reflected in the shopping cart. Quantity will be automatically reduced to the maximum allowed.