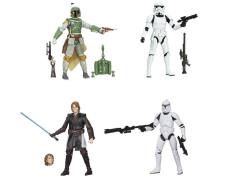 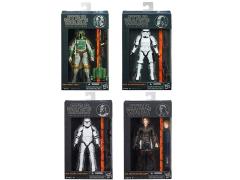 **** - Please note - All cases are factory sealed and items packed inside are not inspected. We can not guarantee packaging condition of individual items packed within the case.

This case is to include the following:

SW 6 INCH BOBA FETT: Conceived during the Clone Wars in the mysterious cloning facility on Kamino, Boba inherits from his “father”, the legendary Jango Fett, the latter’s blaster-deflecting, lightsaber-resistant Mandalorian armor and distinctive helmet. Boba Fett is among the bounty hunters summoned by Darth Vader for the task of tracking the Millennium Falcon. Fulfilling this mission by tracking the Falcon to Cloud City, Fett is given custody of the carbonite-frozen Han Solo, enabling the bounty hunter to collect the lofty bounty placed on the smuggler by Jabba the Hutt.

SW 6 INCH EP4 STORMTROOPER: Due to the inevitable depletion and degradation of the Clone troopers, new recruits are converted into Imperial Stormtroopers, brutal killers who enforce the will of Emperor Palpatine. They are outfitted with white armor reminiscent of the Clone Troopers’ Mandalorian-inspired armor. Stormtroopers are subjected to a grueling training course, and are eventually equipped with the E-11 blaster rifle and outfitted with armor featuring built-in comlinks and varying protection against toxins and hostile environments. Based upon merit and ambition, many Stormtroopers are advanced to specialized classes such as Sandtroopers, Black Hole Troopers, Z-G Assault Stormtroopers, Snowtroopers and Swamptroopers.

SW 6 INCH EPIII ANAKIN SKYWALKER: Electing to assist Chancellor Palpatine in the latter’s duel with Mace Windu, Anakin Skywalker officially crosses over to the Dark Side, and is given the title Darth Vader. Following Palpatine’s orders, Skywalker/Vader coordinates with the 501st on Coruscant, leading the assault on the Jedi Temple which results in the death of virtually everyone within. He later travels to Mustafar to eliminate the Separatist Council, and is surprised when he is confronted both by a heart-broken Padme and a horrified Obi-Wan. In the subsequent duel, which rages across a river of flowing lava, Obi-Wan maims his former pupil, reducing the latter to a scarred, scorched husk.

SW 6 INCH EPII CLONE TROOPER: Derived from the generic material of legendary bounty hunter Jango Fett, the Clone Troopers are ostensibly created as soldiers in the service of Jedi commanders, however once this illusion has served its purpose, Palpatine institutes Order 66, compelling to the clones to turn upon and destroy their commanders in a single fell swoop which eradicates the majority of the Jedi order. the aftermath, once the Jedi temple is sacked and the nascent Empire’s checkpoints established, the Clone troopers are ultimately reformatted into Stormtroopers, brutal enforcers of the Galactic Empire.