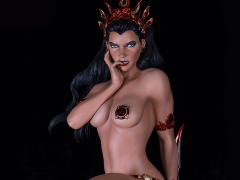 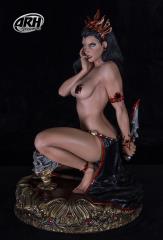 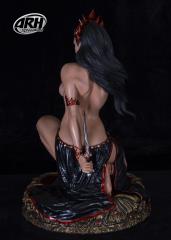 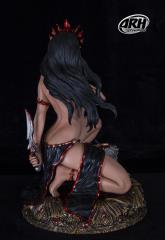 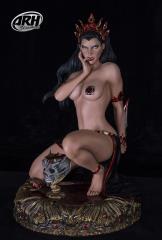 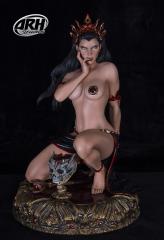 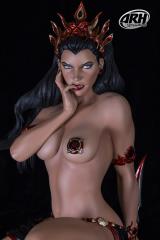 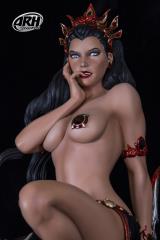 Arkhalla, the Queen of Vampires is the supreme ruler of UR, an empire formed by vampires and humans who live in the same land as masters and servants. Set in the Mesopotamia region, over 5,000 years ago, Arkhalla’s story will fascinate and captivate you as never before. Extremely sensual and completely uninhibited, Arkhalla is a woman who seeks pleasure and dominance over all she rules.

Until the day, Arkhalla falls in love, and the undying queen’s story changes forever! Kneeling over her portal-mirror to the gods below with her skull goblet at her feet, Arkhalla holds her ceremonial knife ready to slash those who fall for her almost hypnotic attraction.

Based on Arkhalla’s first Graphic Novel story, “The Queen of Vampires” by ARH ComiX, this fascinating 1/3rd scale Polystone statue captures all the sensuality and captivating beauty of the undying queen. For the first time ever in a completely nude sculpture, featuring magnetic removal top and bottom pieces, this statue is sure to impress you.

Masterfully sculpted by Ehren Bienert and painted by Arahom Radjah, this special edition version is the only to feature the queen’s scepter.