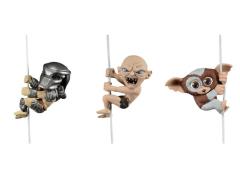 The Series 1 Part 2 Assortment includes Predator (Predator), Gollum (Lord of the Rings), and Gizmo (Gremlins). At only 2 inches tall, there's room for a bunch on any cord. Collect your favorites and take them everywhere!

Predator: A CIA-sponsored Special Forces team enters the Central American Jungle to engage guerillas, and of course the team is mildly surprised to find the guerillas already flayed and butchered. The single orchestrator of this charnel mayhem, an ominous sinuous presence initially sensed but unseen, has now set its sights on the commandos as well. The presence strikes invisibly. Retracing their steps, the commandos attempt to outpace their unknown attacker, even while the presence follows them relentlessly. Ultimately, Dutch, the leader of the outfit, finds himself at odds with the Predator, a hulking crab-mawed monstrosity with physical strength and durability equal to his superior technological gear and weaponry.

Gollum: Originally a Hobbit, Smeagol spends his birthday fishing with his cousin Deagol in the Gladden Fields, and is immediately driven to unreasoning jealously when Deagol inadvertently discovers the One Ring. When Deagol refuses to give the ring to Smeagol as a birthday present, the latter murders the former. The ring provides Smeagol with unnatural longevity, gradually mutating Smeagol into Gollum, a malingering creature who dwells in a dank cavern beneath the Misty Mountains and stealthily feeds upon juvenile goblins. When Bilbo Baggins later eludes a goblin patrol by stumbling onto Gollum’s lair, he briefly sidelines Gollum’s cannibalistic frenzy by challenging the monster to a game of riddles. He (Bilbo) discovers ring, stealing it and intensifying Gollum’s insanity.

Gizmo: Gizmo the Mogwai is acquired by misguided inventor Randal Peltzer from the obscure shop owned by the cryptic Mr. Wing. Randal is vaguely warned by Wing’s grandson that Mogwai, averse to bright light, cannot be exposed to water and cannot be fed after midnight. Gizmo provides Billy with a unique, charismatic mascot, although when Gizmo is accidentally exposed to water, he produces five duplicate Mogwai. When Stripe and his followers are transformed into larger, more capable Gremlins, Gizmo assists Billy and Kate in battling the original Gremlins as well as the army gained by Stripe after he (Stripe) gains access to the YMCA pool.