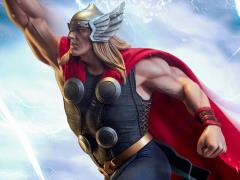 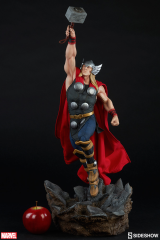 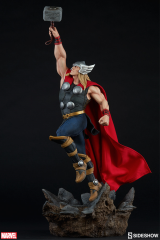 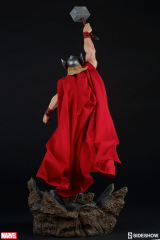 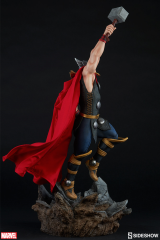 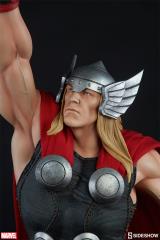 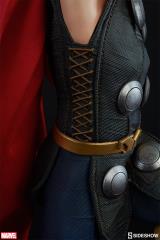 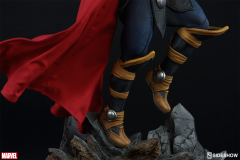 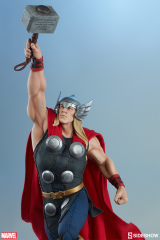 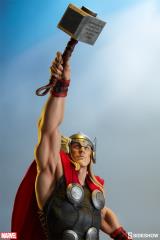 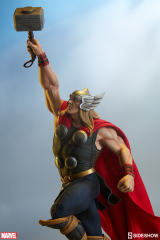 Sideshow adds another member to the 1/5 scale Avengers Assemble figure series, The God of Thunder himself: Thor!

Inspired by some of Marvel’s most popular superheroes in their most iconic guises, the Avengers Assemble statues capture the power, majesty and sheer awesomeness of Earth’s mightiest heroes!

The Thor collectible figure takes to the fray with a suitably dynamic pose; he joins Captain America and Iron Man to battle an unseen foe, hammer held aloft, ready to bring down a devastating bolt of lightning or launch himself into the sky! His themed character base echoes those of his fellow Avengers, allowing him to be displayed alongside his colleagues in an action-packed diorama, as well as a stand-alone piece.

Every inch of this classic Thor collectible figure has been crafted with loving detail; from the creases and folds of his meticulously sculpted garb and every wrinkle in his wire-lined fabric cape to the bulging muscles of his godlike physique and his flowing blonde locks.

This limited edition museum-quality series harkens back to more nostalgic interpretations of the Avengers, paying homage to Gold and Silver Age representations of these beloved characters.