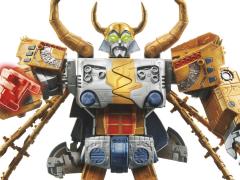 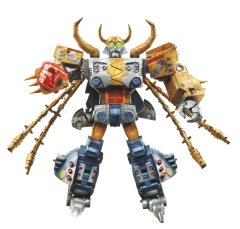 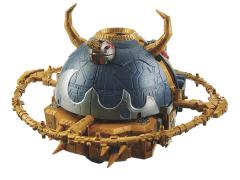 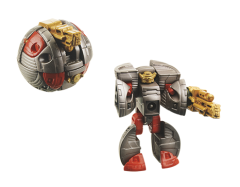 Unicron is the harbinger of chaos. He is the source of a deep and infinite darkness. He trolls the universe without haste or fear. Unicron devours the entire solar system with numbing precision. Unicron devours moons and stars and life itself. He cannot be stopped.

Decepticon Unicron features LED eyes that glow menacingly when the button on his head is pressed down. He's also equipped with 2 ankle-bound rocket launchers, as well as a secret cannon hidden inside his chest compartment for sneak attacks. These launchers can fire projectiles when a Mini-Con figure is attached to Unicron. He offers a number of secret compartments scattered across his body, which he can use to entrap his Mini-Con minions!

This figure also features articulated arms, legs, shoulders, knees, and a pivoting torso; even his decorative horns and tendrils can bend and move!

Unicron can transform into a giant robotic planet where he becomes an entirely different toy, and a great way to store Mini-Con figures. Mini-Cons can also be used to activate various features while Unicron is in planet mode: he can unleash a barrage of missiles, enter defense mode, and more!

Unicron also comes with an exclusive Mini-Con figure named Kranix, a traditional Mini-Con that can convert from a robot into a sphere.